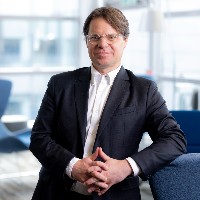 Professor Spicer is an award winning teacher. He has worked with students at all levels - from first year under-graduates to top level executives in large organisations. He recently co-developed an award winning course on critical thinking for business students.

He has published extensively in top scholarly journals such as Academy of Management Review, Organization Science, Academy of Management Annals, Journal of Management Studies, Organization Studies and Harvard Business Review. He has also published many books including ’The Stupidity Paradox’ (profile), 'Metaphors we Lead By' (Routledge), 'The Wellness Syndrome' (Polity), ‘Business Bullshit’ (Routledge) and ‘Desperately Seeking Self Improvement’ (OR). He has received research funding from the ESRC, British Academy, Handelsbanken Foundation, the Welsh Assembly, the Civil Aviation Authority and the Higher Education Innovation fund.

He is a frequent commentator in the global media outlets such as FT, CNN, BBC, CNBC, Channel Four, The Guardian, The Wall Street Journal, The Washington Post, The Times, Telegraph, Independent and many others. He has worked with a range of large organisations including Barclays, City of London Corporation, Skandia Old Mutual, BNY Mellon, Transport for London, IBM, Ford, UK Houses of Parliament, Odgers Brendtson, the Bank of England and InterSpa (Austria). He is invited to give speeches in range of settings like the European Central Bank, the UK House of Lords, the European Commission, the Mansion House, TEDx and at universities around the world.

He is a member of Senior Leadership Team of City, University of London and sits on the University Council. He was previously the Head of Faculty of Management at Bayes.

My research focuses on political dynamics in and around organizations. I have written on a range of topics including political theories of organization, politics of seaports, the transformation of public broadcasting, changing library spaces, the politics of building new institutions, and the dynamics of new media organizations

Examines the construction of responsible organizations and markets

Examines leadership in a range of knowledge intensive contexts

Examines how the introduction of new spaces impacts on organization

Thesis title: Identity Transitions in Organizations: The case of retirement and downshifting

Thesis title: The Production of Space in a Public Sector Organization