Cass Business School is delighted to announce the winners of the NMG Consulting prize for Actuarial Science in 2016/17.

Mr Nitish Suresh and Mr Abhinav Gakhar, who both scored the highest marks in the Actuarial Risk Management modules in the last academic year, will share the £2,000 NMG Consulting prize. This award, judged by Cass academics and sponsored by NMG Consulting, is open to students studying the MSc in Actuarial Management.

"We’d like to congratulate the two winners on their outstanding success in the examinations. NMG greatly values its association with Cass and are delighted to confirm that we will be continuing this in 2018.”

Professor Ben Rickayzen, Head of the Faculty of Actuarial Science and Insurance at Cass, congratulated the two prize winners and said:

"This is a highly sought after honour and the competition was strong this year, so well done. I would also like to extend my thanks to NMG Consulting who have sponsored these prizes since 2012 and I look forward to our continued relationship.” 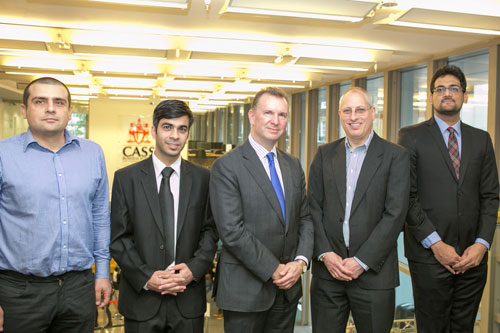 NMG Consulting's vertically integrated model – high impact consulting backed by the ‘information advantage’ arising from proprietary research and analytics programmes – is a unique point of difference in a crowded market. Established in 1992, the business has an established global presence with major hubs in Sydney, Kuala Lumpur, Singapore and London, and an increasing presence in North America and South Africa.