The Covid-19 pandemic did not leave any country, or any city, untouched; and our city of London was no exception. So, it was only fitting that the theme of the 2022 London Symposium at Bayes Business School was “Time to Build”.

A city like London, with its rich past and endless possibilities for the future has the potential to be a Pandemic Phoenix and rebuild to achieve its full potential and there is no better place to start that conversation than a room full of future business leaders.

What made this year’s Symposium even more exciting was that this year it was back to being held in-person for the first time in two years and it was being held in four fantastic locations across London. 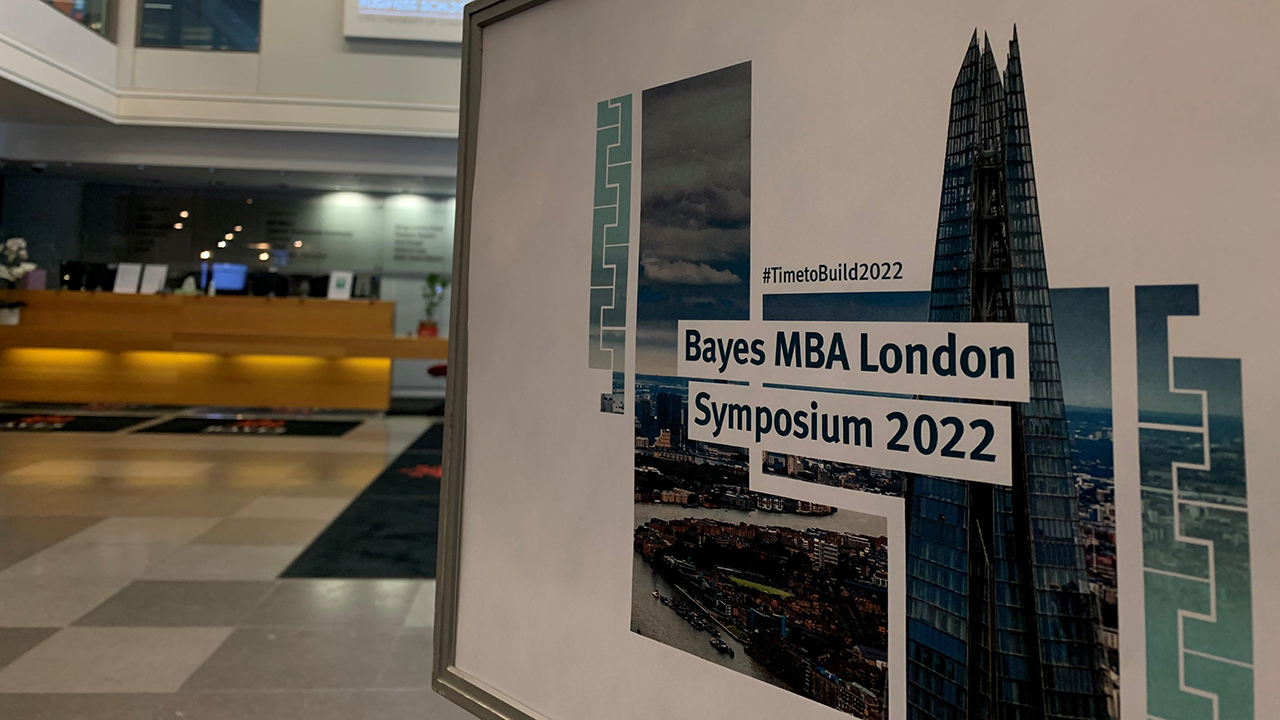 Along with all the different MBA cohorts from Bayes Business School in London and Dubai, the Symposium was also attended by MBA students from Mannheim Business School, Germany.

Business and thought leaders from the fields of Economics, Journalism, Business Strategy and Innovation, Finance, Energy and even Sports gave the attendees insights into how we, as future business leaders, can rebuild a post-pandemic business world.

The first day of the Symposium, held at Bayes Business School building in Bunhill Row, was all about what is next for a post-pandemic, post-Brexit London. The day was kicked off by the Dean of Bayes Business School, Professor André Spicer, followed by Professor Sir Anthony Finkelstein, President of City, University of London, who spoke about what it means to be Bayesian and how Thomas Bayes’ ideas of getting closer to the truth by constantly updating our beliefs in proportion to the weight of new evidence are all the more important now. 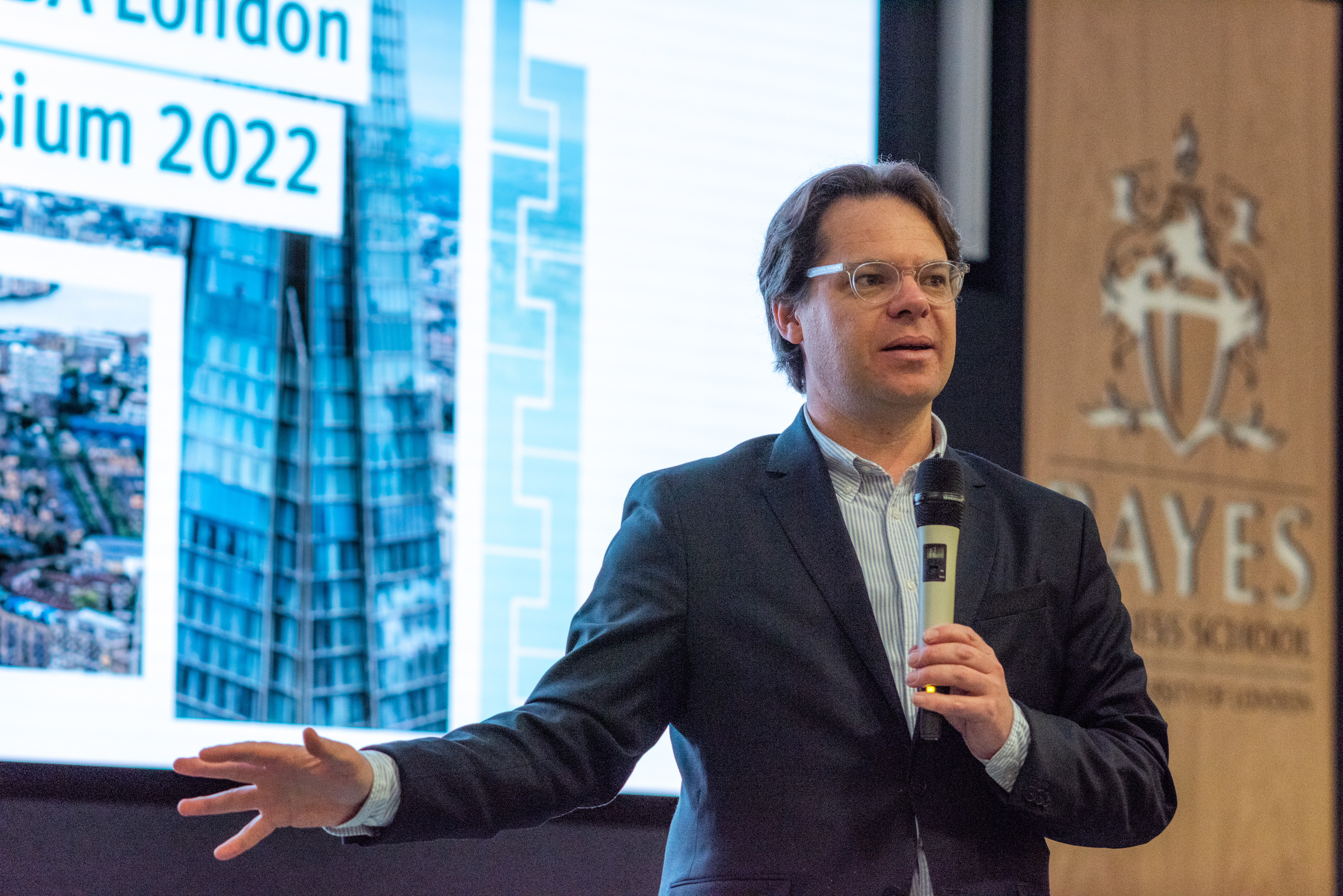 The first guest speaker was James Woudhuysen, a prominent British journalist, broadcaster and visiting professor at London’s South Bank University. Professor Woudhuysen spoke about how the UK is holding itself back from maximising its productivity and the steps that can be taken to ensure continued progress.

The next speaker was Joan Hoey, Regional Director Europe, Economist Intelligence Unit, at the Country Analysis Division. The talk examined the bigger picture for London and the UK, both economically and geo-politically, in light of Brexit and the Russian invasion of Ukraine. 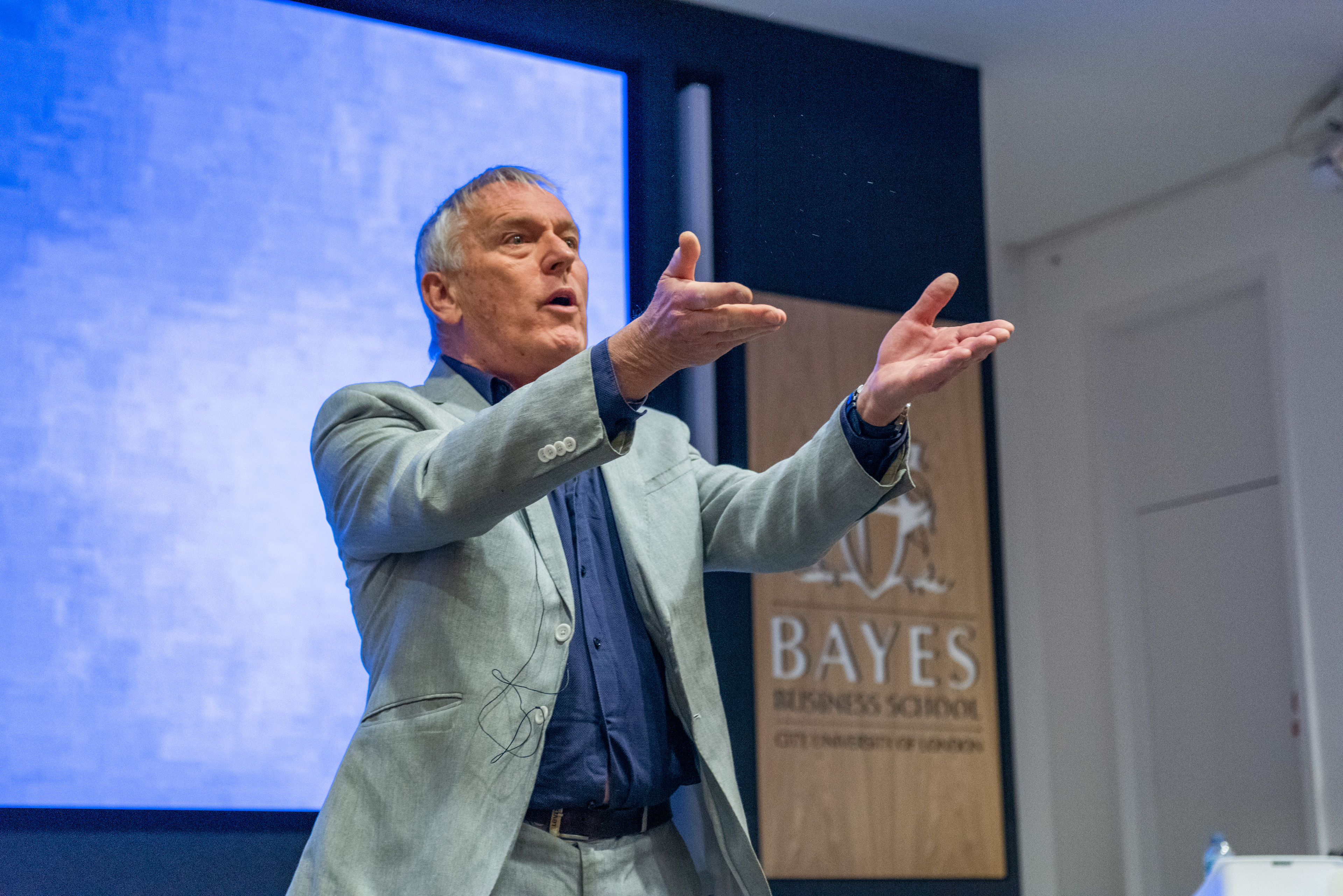 Ms Hoey was followed by Phil Mullan, the author of books such as ‘Creative Destruction – How to Start an Economic Renaissance’ and ‘Beyond Confrontation – Globalist, Nationalists & their Discontents’ who gave a very intriguing talk titled “Where’s our Economic Renaissance” discussing the prospects for the British economy in the near future, while giving historical insights into how growth occurs through a shift of resources towards higher productivity.

The final speaker of the morning was Andrew Carter, the CEO of Centre for Cities, a research unit and charity focused on understanding how and why economic growth and change takes place in cities in the UK. Mr Carter discussed the post-pandemic economic situation of London, its strength sectors and London’s role in the UK economy. He also spoke about the potential that London holds for the future and how it can grow.

The first day wrapped up with students having the option to choose between one of three fantastic masterclasses or business visits – a visit to the Accenture Interactive Innovation Lab or to The Reform Club in Pall Mall, or a masterclass with Michael Shea and Damian Glover from Wider Team.

The second day of the London Symposium was held at the Royal Geographic Society in South Kensington. The discussions on Day Two were centred around the new demands of leadership, creating a forward-looking vision and purpose for businesses, and engaging the organisation to move towards that purpose.

The day began with a riveting conversation between Atif Sheikh, CEO at Businessfourzero, and David McMillan, the CEO of esure. Mr Sheikh and Mr McMillan discussed how leaders can set a vision and a purpose, not just for their businesses, but also for the society. They used esure’s vision of “Fix insurance for good” to elaborate upon how leaders can achieve this goal. Next, Mark Sherwin, the Managing Director of Accenture Interactive, gave the attendees his viewpoint on the role of businesses in the society and economy today and how London’s businesses could consider their role in them, stressing that businesses must keep evolving in a post-pandemic world to change the way they engage and interact with their customers.

One of the most riveting talks of the Symposium was given by Marzena Bogdanowicz, the Head of Marketing and Commercial for Women’s Football at the English Football Association. Marzena spoke about the challenges of forging a clear path and purpose for women’s football in country where men’s football dominates.

The discussion around breaking the negative stigma and fighting the forces that prohibited women and girls from playing football for a long time, resonated deeply with the audience. The last speaker of the second morning session was the well-known leadership expert and coach, Rene Carayol, who spoke about the importance of leading with purpose and how future leaders can shape organisational purpose in a meaningful way. The day wrapped up with three great masterclasses by representatives from Businessfourzero, the Aleto Foundation and Lewes Football Club. 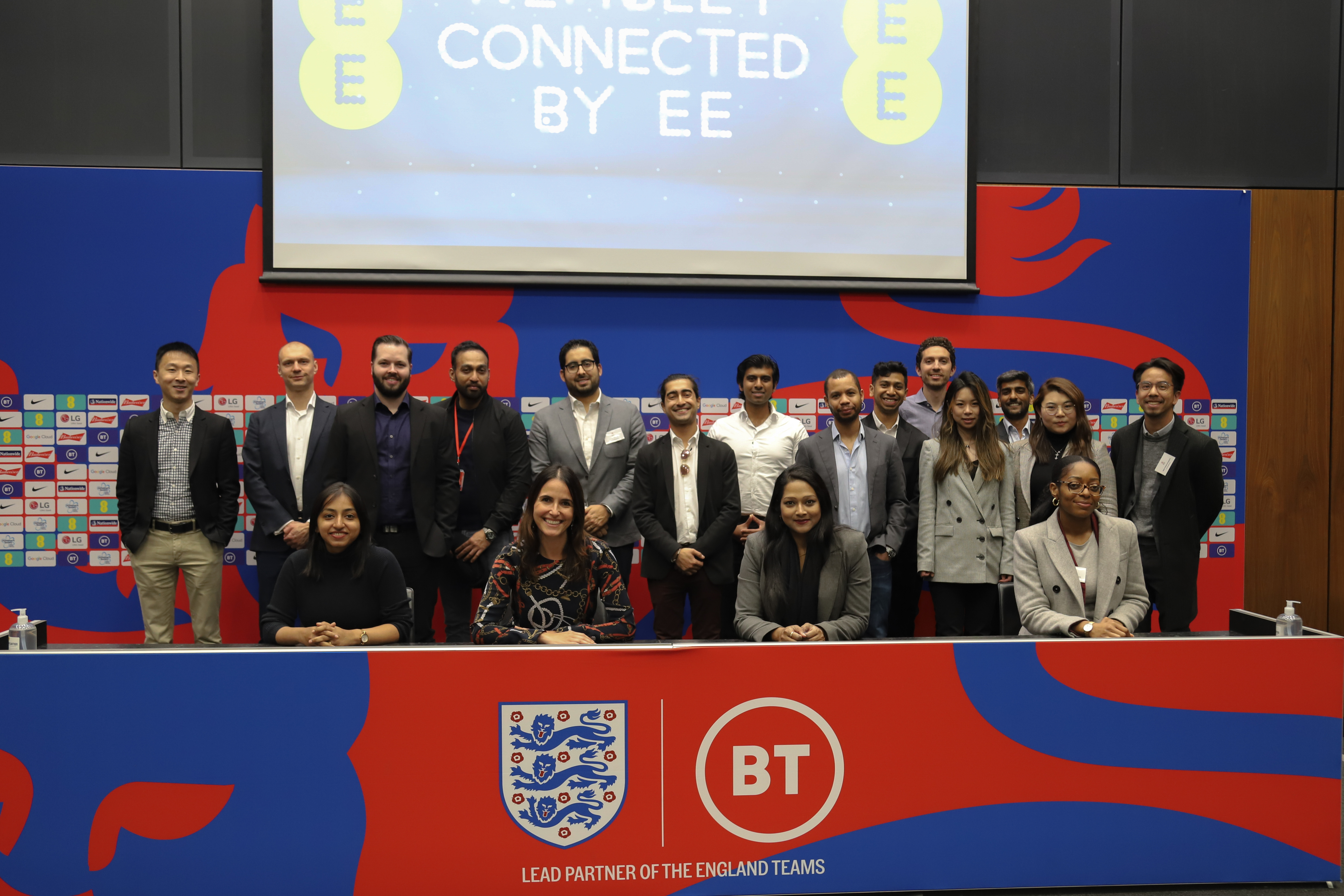 The third day of the Symposium was held at the Royal Institution of Great Britain. The great location had the students attending lectures in the same room where greats such as Michael Faraday spoke about their discoveries.

The overarching themes of the day’s talks covered the current challenges of energy supply, its cost and sustainability, along with the ongoing crisis in Ukraine. The discussions also touched upon the future plans of businesses for achieving Net Zero, and the tensions between business growth and Net Zero. 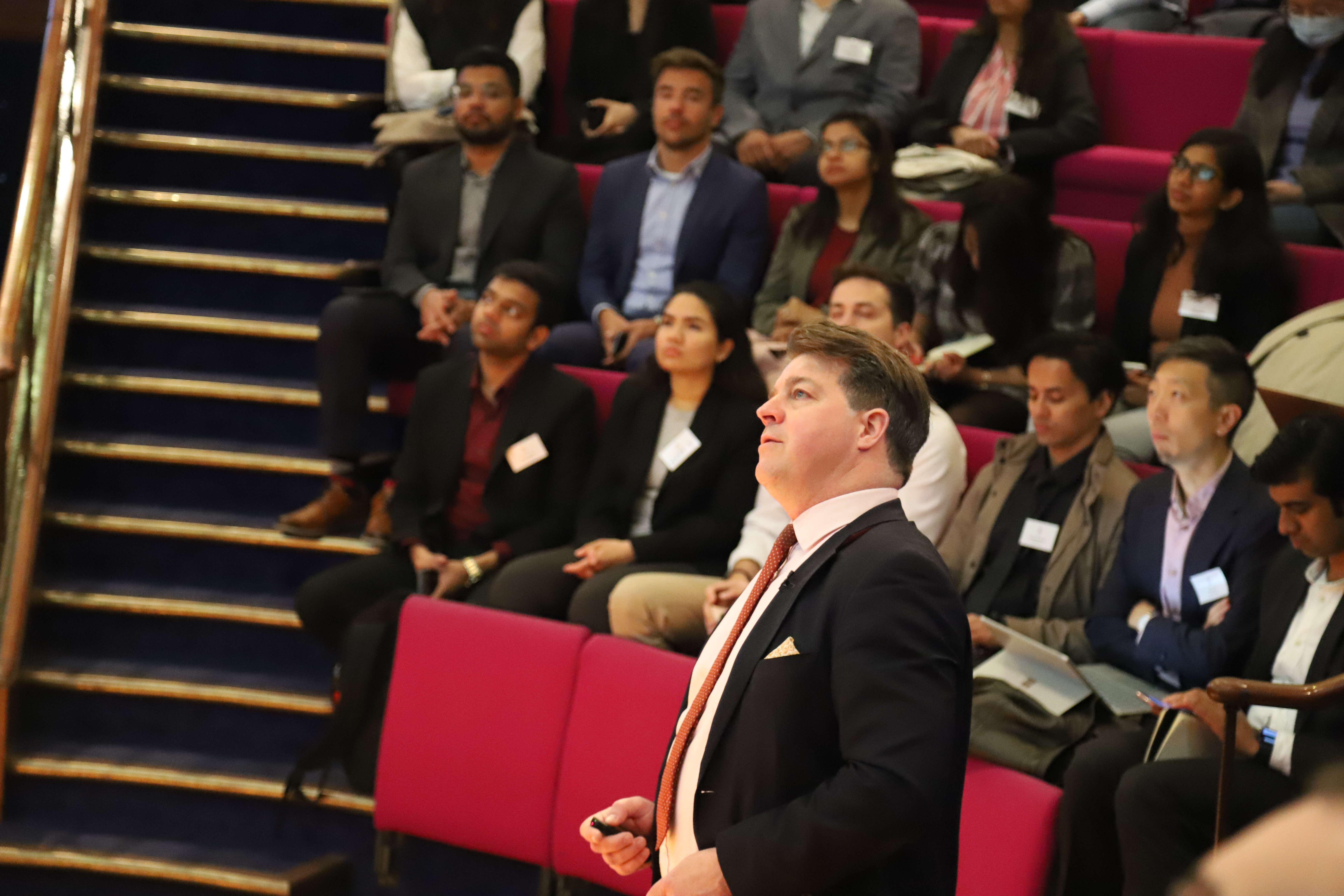 The day started with a talk from Liam Halligan, a prominent British columnist and economist, who gave the audience “The Big Economic Picture” of the UK and Europe in the macroeconomic and geopolitical contexts. This was followed by a presentation by Dieter Helm, Professor of Economic Policy, University of Oxford, who focussed on the steps that need to be taken to achieve Net Zero by 2050, energy security and how an affordable energy policy can be designed.

Next up was Ali Miraj, Infrastructure Financier at ING and a Bayes alumnus himself, whose talk was entitled “Statecraft, Infrastructure and the Reshaping of the World Order.” Mr Miraj, in his engaging and witty way, spoke about shifting the UK’s focus to

“level up” its economic regeneration and the importance of ethical leadership in time of crisis, citing the ongoing Russia-Ukraine conflict. He observed that, “we are living through a pivotal period that will influence a history that is yet to be written,” and that we, as future leaders, have the responsibility of shaping that history.

The final speaker of the morning session was Paul Stein, the Chairman of Rolls Royce Small Modular Reactors. Mr Stein discussed the challenges and the potential of an energy transition and how can businesses and the government get the transition right. He also spoke about the merits of nuclear power despite the fact that nuclear energy is often seen as a problem, when in fact, it can be the solution to the energy crisis.

The last set of masterclasses of the Symposium were held on day three by Nuno Pedro, Senior Consultant at Sia Partners, Christophe Williams, Co-Founder of Naked Energy, and Chris Mortensen, Chief Operating Officer at Modulous.

The fourth, and last, day of the London Symposium 2022 was held at the beautiful National Gallery in Trafalgar Square. While the first three days were focused on the material realities of pathfinding and economic recovery, the last day was more personal where the speakers discussed how can we, as leaders, build better workplace cultures to make future workplaces more fluid, exciting, and energetic.

The first speaker of the day, and my personal favourite speaker, was journalist, comic and author of ‘Lift as You Climb’ and ‘How to Own the Room’, Viv Groskop. Viv led an engaging and interactive session about the changing face of leadership, and how we don’t really know what that change looks like till we see it. She cited examples of Michelle Obama and Greta Thunberg to further stress her point. This knowledge, Ms Groskop said, gives us the permission to be whoever we want to be as future leaders.

The next speaker, Kunle Olulode MBE, Director of Voice4Change England, spoke about the currently pertinent issue race equality policy in Britain in 2022. Mr Olulode touched upon the history of race equality in Britain and how diversity is evolving in modern-day Britain. Next up was Charlotte Cramer, healthtech consultant and author of ‘The Purpose Myth’, who spoke about the importance of having a purpose in life, and how we can develop that purpose.

The final speaker of the Symposium was Dr Harvey Lewis, Associate Partner at EY, and Honorary Senior visiting Fellow at Bayes. Befitting the theme of the four-day Symposium, Dr Lewis spoke about what London looks like at work in today’s times and how it will transform in the future, not only in terms of skills and technology of the workforce, but also in terms of how that workforce will collaborate and create new opportunities for change.

After all these interesting, but rather weighted discussions, the Symposium ended on a lighter note with a closing party at the beautiful Pompadour Ballroom at the historic Hotel Cafe Royal in London. The four days of the Symposium were not just filled with learning, but also with introspection – on where we are coming from and where we can go. It is now our time to build a new reality and a new business world as the leaders of tomorrow.