The Shaman who turned around Ducati, comes to Cass

When you retire you would want to have enough money, a house, a nice car or probably kids; but very few will have the luxury of leaving a legacy behind them.

Yes some people are either lucky to be in that place in that time, or they were just an out right maverick with their work. We were honoured enough to meet such a person in our last Strategy module who through his work turned around a legacy company to world dominance in its segment.

The person I am talking about is none other than Mr Federico Minoli, Mr.Turnaround, Mr I will get the company out of the deep hole, Mr who brought Ducati back from the crisis and Mr who inspired Siddharth Lal to restructure Royal Enfield to become one of the leading brands in 400-600CC motorcycle market, worldwide.

Growing up in a motorcycle environment, I would never have imagined that I would meet this man, let alone to be standing next to him and getting my photo clicked. It was all good work from our professor who through his work and his experience knew him well and arranged a guest lecture from him.

It was insightful and entertaining, something that is very rare with business people and because he was both I like to refer him as … Shaman (it’s not something I invented, he termed himself as a shaman and gave the entire back story as well).

Well for the ones who think I will be giving away his entire lecture, you are out of luck, you need to join the Cass Full Time MBA program and beg Dr Aversa (our professor) to get Mr Federico back on the panel. You don’t get free lunches you see. However, I will not just yap around the topic, I will give you a broad outline of his talk.

Well in the 1990’s, 1996 to be precise Ducati was bought over by an investor and Mr Minoli was hired as the head of that project, he talked about sticking it to the brand and the brand ambassadors first – hence came the Ducati Museum. It is worth saying that they treat customers like gods, but interestingly enough not many brands  reply to customers let alone making them ambassadors. Harley did that and we know that this brand does not need any ambassadors, anyone riding a Harley automatically becomes the marketing manager of the brand, such is the close knit community of the brand. 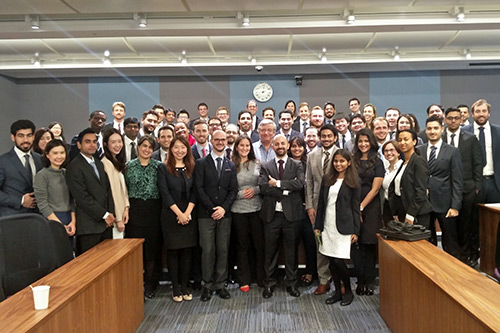 Next he spoke about innovation, it is imperative to be liquid in finances and liquid in head. Your dynamic strategy can develop an advantage that can take care of any disruption. But as a head of the company you need each and every employee to participate in the thinking. Because, wait for it… this is what happened in Ducati, the MH900E sale on 31st December 1999 and was an idea from someone in middle management and it became a case study in itself.

We have all worked in teams, worked under bosses but when you become one, he says – be dynamic, be bold, be the brand, love it, cherish it and love the people associated with it because at the end the day, humans and only humans will take your brand to legendary level and you my friend will end up with a better car, much more money, and yes, a legacy; kids? Well not for me.