Congratulations to Professor Thorsten Beck, who has been appointed as a full member of the Advisory Scientific Committee (ASC) of the European Systematic Risk Board.

The committee consists of 15 experts representing a wide range of skills, experience and expertise.

The ASC contributes to the public debate on macroprudential policy by publishing reports. Past contributions include calls for: credible bank resolution; a European capital markets union; and enhanced disclosure of carbon-intensive assets.

It is an honour to be appointed, as it recognises my research achievements and previous contribution to the policy debate in Europe.  More than an honour: I see this as a task and obligation. In my opinion, one of the important lessons of the recent rise in populism and anti-establishment politicians is that social scientists, including economists, have to play a much more prominent role outside the academic ivory tower. Engaging with policy makers is an important part of this role.

"I will be part of a group of 15 economists from around the world providing analytical input into the work of the ESRB (established in 2010 to oversee the financial system of the European Union (EU) and prevent and mitigate systemic risk). The work of the ASC has been quite impactful over the past years, producing several high-level reports that have contributed to the policy discussion in Europe.

"For example: A report on the bank-bias in Europe and its negative repercussions for growth and stability.  This report can be seen as an important intellectual backdrop for the push for a capital market union in the EU to thus strengthen non-bank segments of the financial system and public capital markets. A second important report has been on creating a synthetic safe asset for the Eurozone, a suggestion that has been turned into a European Commission legislative proposal". 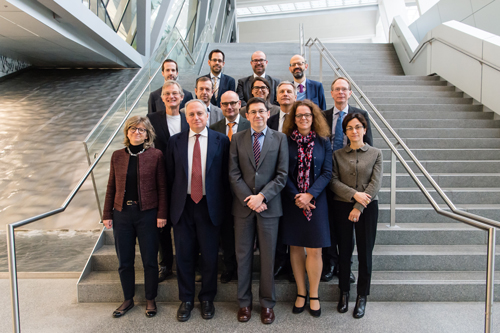 There has always been a close relationship between policy and research in his work.

I expect similar effects from my work at the ESRB, both bringing in my research but also receiving new ideas and impetus for research.  The appointment will also have impact on my teaching – in both my business economics and international financial management courses I refer to current political and policy discussions, so my work at the ESRB will certainly influence my teaching.