Professor of Digital Creativity at Cass Business School Professor Professor Neil Maiden has been working with research fellows Dr Konstantinos Zachos, Dr Amanda Brown and James Lockerbie, and visiting Professor George Brock to develop INJECT, a new tool for journalists to discover new angles on original stories. It uses AI-based techniques to generate guidance for journalists quickly, and manipulates the content of millions of published news articles from over 300 titles to present new concepts for stories.

“In today’s newsrooms, journalists increasingly lack the time needed to research more original stories. INJECT supports this research by generating new angles and content for stories at the click of a button.

“We sought a form of artificial intelligence that enhances and empowers journalists, rather than threatens and replaces their work.” 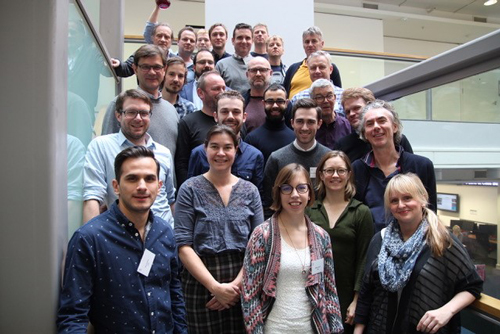 The team behind INJECT

The INJECT consortium is coordinated by Cass Business School and City, University of London with 14 other partners. Cass also provided additional funding following the initial project, to develop and market proof the concept in the German market.

“The proliferation of information available online creates new problems for reporters. Conventional search engines will supply some of what they want but they also need new angles of approach – and they need them quickly. Because of the collapse of journalism’s business models, reporters are being asked to produce more and more in a hurry.

“INJECT was created to try and help. It looks ‘sideways’ at relevant material and can sort it into the sorts of approaches which journalists use all over the world. It can produce ‘prompts’ for new angles in a matter of seconds. The material thrown up is from reputable databases and the sources can always be shown. In short, journalists can use it to improve what they do - and do it faster.”

“One of our strongest markets currently is quality journalism in Germany. We are pitching INJECT to news and magazine publishers, and to television news channels, with relevant value propositions, and working with key German partners.”

The spin off business, a UK-based social enterprise, is set to launch in early 2019.  It will seek additional investments so the product can be grown and developed, and related services can also be built.  Initial Feedback from freelance journalists who use the tool have said it is a great way of getting ideas they wouldn’t have thought of otherwise.