Lessons from Formula One

Panelists lined up on the starting grid at Cass to discuss lessons for business from Formula One.

Panelists lined up on the starting grid at Cass to discuss lessons for business from Formula One.

To explore the F1 phenomenon and to see what lessons could be learned from it, Cass invited leading industry analysts for a discussion Competing in Turbulent Environments: Lessons from F1.

Introducing the event, Dean Professor Marianne Lewis told the audience: “Tonight is the perfect example of the three engines that drive Cass: knowledge, education and community.”

The event was chaired by Dr Paolo Aversa, Lecturer in Strategy. Introducing the panel, he said: “We are trying to understand from in this environment what can be transferred to other worlds.” 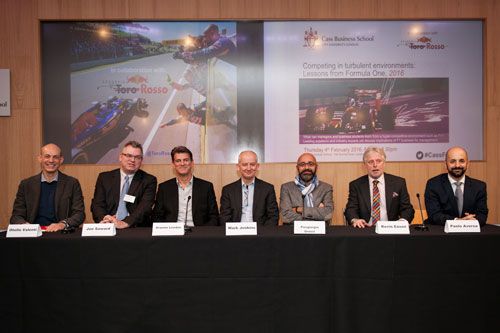 In pole position with Dr Aversa were:

Taking the lead, Mr Valenti talked about what he had learned while being at Torro Rosso: “You need stable leadership at the helm of the company, clear performance expectations within the team, be able to make fast decisions and learn from results. You need to continuously hire the best talent and try to keep a high profile in the media.”

Mr Lowdon said he had always viewed Formula One as the greatest team sport in the World, because the team is all focused on one task.

“It’s an incredibly simple business,” He said. “But in its simplicity lies the reason it’s so difficult: Because there’s a bunch of other people trying to do what you do in other teams.”

Mr Eason gave some anecdotes of his meetings with Bernie Ecclestone, and said: “Formula One has teams of incredibly committed people. The one thing that Formula One has is a great philosophical conundrum: it doesn’t know if it wants to be a sport, entertainment or a business.”

See what was Tweeted at #CassF1