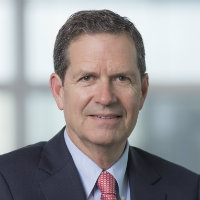 Professor in the Practice of Finance, Director M&A Research Centre

Professor Scott Moeller has been teaching at Bayes Business School (formerly Cass) since 2002. He is the founder and Director of the M&A Research Centre (https://www.bayes.city.ac.uk/faculties-and-research/centres/marc) and the former CEO and Director of Executive Education. He teaches 'Mergers & Acquisitions' in the MBA and MSc programmes and has also taught 'Business Intelligence and Social Networking' in the MBA programme and 'Corporate Finance' in the executive education programmes. He has also been a visiting lecturer at Imperial College (London) and Oxford University.

Scott is a frequent commentator on business issues related to M&A on television (BBC, CNN, Bloomberg, CNBC) and in the press (Financial Times, Sunday Times, Independent) and has written for the Wall Street Journal, the BBC and other publications. One of his books received an award in the United States as one of the top 30 business books of the year in 2008.

Scott had a long career in banking prior to his move to academia. During his six years at Deutsche Bank, Scott was Global Head of the bank’s corporate venture capital unit, Managing Director of the Investment Bank's Global eBusiness Division and Managing Director of the department responsible for world-wide strategy and new business acquisitions. Scott worked first at Booz Allen & Hamilton Management Consultants for over 5 years and then at Morgan Stanley for over 12 years in New York, Japan, and then as co-manager and then member of the board of Morgan Stanley Bank AG in Germany. Scott has held a number of other board seats throughout Europe, Africa, Asia and the Americas and is currently a non-executive director on several boards.

Success qualitities for mergers in the health care industry