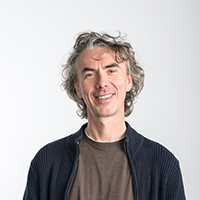 Neil Maiden is Professor of Digital Creativity in the Faculty of Management at the Bayes Business Business (formerly Cass), where he is Director of the National Centre for Creativity enabled by AI (CebAI). He was also co-founder of the Centre for Creativity in Professional Practice at City, University of London. He initiates and leads interdisciplinary research in software engineering, creativity science and integrated health and social care. He has been a principal investigator on research worth over £64 million, directly managing over £10 million of this income at City. He has published over 250 peer-reviewed research papers in leading journals such IEEE Transactions on Software Engineering and Communications of the ACM and conferences such the ACM/IEEE International Conference on Software Engineering. He is a recognised thought leader in his disciplines. His work has been recognised many time through invited keynote talks and awards from his peers.

His current funded and doctoral research is in 3 main disciplines:
1. Digital creativity support for professional work
2. Specifying and designing complex digital systems
3. Digital support to improve the care of older people with dementia

1995 Accepts Visiting Chair at RWTH-Aachen in Germany with Prof Matthias Jarke, and tenured position in School of Informatics at City, University of London

2003 Promoted to Chair as Professor of Systems Engineering at City, University of London

2008 Co-founds the Interdisciplinary Centre for Creativity in Professional Practice at City, University of London, and Masters for Innovation, Creativity and Leadership

2020 Launches the JECT.AI start-up based on his research into digital creativity support for professional work

2020 Sets up and becomes Director of the new Centre for Creativity enabled by AI , funded by UKRI's Research England and City, University of London

Neil has published over 250 peer-reviewed research papers, and been a principal investigator on over 30 EU, EPSRC and bilaterally funded research projects worth over £64 million, directly managing over £10 million of this income at City.

Neil constructs and uses novel theories and models of creativity to design, implement and evaluate digital support for human creativity in professional domains. This digital support is implemented as computational services, mobile apps and websites. It supports creative thinking in professional domains that include design, risk management in health-and-safety, medical training, social care, elite sports coaching, and journalism. Users of results from this research include journalists at newspapers Hordaland, Hallingdolen and Sunnhordland as shown here, knowledge workers in the Waag Society, and production line staff at CNH Industrial, a part of the FCA Group. This research underpins the JECT.AI start-up being launched in the news and content creation sectors. Explore one example of this digital creativity support using the Bright Sparks web application.

Neil constructs and uses theories and models in requirements engineering to design and evaluate new methods and software tools to support front-end analysis work. These methods and tools support tasks such as goal modelling and analysis, scenario-led requirements discovery, and predicting the political and other impacts of requirements-led organisational change. Users of this research have included the UK’s National Air Traffic Service, Rolls Royce and IBM.

3. DIGITAL SUPPORT TO IMPROVE THE CARE OF OLDER PEOPLE

Neil undertakes interdisciplinary research to design, implement and evaluate new digital technologies to support the post-diagnosis care of older people with dementia. These technologies include mobile support for digital capture of care records, serious games with blended interactions to provide carer training, digital creativity support for creative thinking about challenging behaviours, and a computational models of quality of life for older people. Users include the Registered Nursing Home Association, Skills for Care and Nightingale Hammerson. Current highlights of this digital support are the Care'N'Share web application, which supports collaboration and knowledge between carers based on creative search algorithms, the CarePulse, web application for collecting and managing care quality measures, and the SCAMPI toolset for managing quality of life.

Neil is currently leading projects that are researching new forms of digital creativity support for its widespread uptake and use in diverse sectors of the economy:

CebAI: Principal investigator and Director of UKRI Research England-funded Centre for Creativity enabled by AI (2020-2024), total grant value to City £3,359,113, with another £2,668,247 contributed by City, and £1,1705,347 contributions and contributions-in-kind from industrial partners

COLLAGE: Principal investigator and Scientific Director of the EU-Funded STREP Project on Social Creativity and Learning (2012-2015), total value to City €399,207, total value of grant €3,749,386. Project information is here. Neil has led the project's research to develop creativity support apps such as BrightSparks and Be Creative

Care’N’Share: Principal Investigator on Skills for Care-funded project to support person-centred care learning (2014-2015), total value to City £35,142. Neil directed research that led to the innovative Care'N'Share application, which is available publicly to support creative and collaborative care of older people with dementia

MIRROR: Principal investigator EU-Funded FP7 Integrated Project on Creativity and Reflective Learning (2010-2014), total value to City €529,000, total value of project €8,863,904.The project website is available at here. Neil led the work package to integrate creative thinking and reflective learning theories and software apps. Results was published in a cover research article in Communications of the ACM, as well in the Behaviour and Information Technology Journal, International Journal of Creative Computing and the ACM Creativity and Cognition Conference 2013

S-CUBE: Principal investigator EU-funded FP7 Network of Excellence on Software Services (2008-2012), total value to City €682,000, total value of project €11,046,200. The Software Services and Systems Network's website is available here. Neil directed the network's research that investigated the intersection of software services and human-computer interaction. Results were published in the International Journal of Systems and Service-Oriented Engineering.

EUROCONTROL: Principal investigator on 4 contracts to research and deliver the RESCUE user-centred requirements engineering process for air traffic control conflict resolution system as part of EATCHIP (2000-2004): total value to City of all contracts €320,000

Daimler-Chrysler: Principal on bilateral funding to acquire and model requirements for the EU project CORONET in which Daimler-Chrysler are a partner (2000): total value to City £24 000

London Borough Of Barking/Dagenham: service to deliver a user requirements specification for an IT system that supports councillor’s access to information (1999), total value to City £3,700