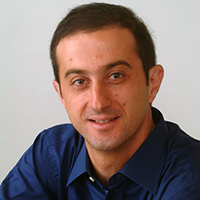 Lucio’s main research and teaching interests are in international finance, empirical asset pricing, and portfolio management. He is the author over 80 articles, published in top finance journals such as the Journal of Finance, the Journal of Financial Economics and Review of Financial Studies, as well as general and top field journals in economics. He has also authored and edited several books, including the edited volume Handbook of Exchange Rates (Wiley, 2012) and the graduate textbook The Economics of Exchange Rates (Cambridge University Press, 2003). His work has often been featured or quoted in the press, including the Financial Times, the Wall Street Journal, and the New York Times.

His research has received funding from several agencies, including three ESRC grants and three INQUIRE grants, and has been awarded the Best Paper Prize for Investments by the Western Finance Association in 2013, and Best Paper Prizes by INQUIRE both in 2010 and 2011. In 2011, he was chosen by Poets & Quants to be among their “40 under 40”, a listing of the best 40 business schools professors under the age of 40.

In addition to teaching and doing research, Lucio has been involved in policy advice, training, research and consulting projects for a number of institutions, including the International Monetary Fund, the European Central Bank, the Federal Reserve Banks of St. Louis and New York, the Bank of Canada, the Central Bank of Norway, the Italian Ministry of Economy and Finance, the World Bank, and the European Commission. He has wide-ranging consulting experience (over 15 years), involving some of the world's leading asset management firms, hedge funds, sovereign wealth funds, investment banks, and their research units, and has held senior positions outside academia, including as Director of Currency Research at AXA Investment Managers.