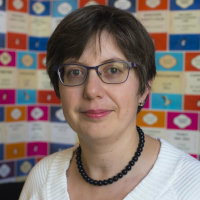 Dr Dimitrina S. Dimitrova is a Reader in Actuarial Science at the Faculty of Actuarial Science and Insurance (FASI), Bayes Business School (formerly Cass), City, University London. She joined FASI in October 2004 as a Research Assistant, in January 2008 was appointed as an RCUK Academic Fellow and became a Lecturer in January 2011.

Dr Dimitrova holds an MSc (with distinction) in Applied Mathematics with specialization in probability and statistics from the Faculty of Mathematics and Informatics, Sofia University. She obtained a PhD in Actuarial Science from Bayes Business School (formerly Cass), City, University London in 2008. From 2001 to 2003 Dr Dimitrova has worked as a Risk Analyst in the Risk Analysis and Control Department of the Central Bank of Bulgaria. For two academic years, she has also been a visiting lecturer in Mathematical Finance and Differential Equations at the Faculty of Mathematics and Informatics, Sofia University.

Dr Dimitrova holds the Chartered Financial Analyst designation since 2006, she is a member of the CFA Institute, USA and the CFA Society of the UK.

In 2010, Dr Dimitrova was awarded a Postgraduate Certificate in Academic Practice (with distinction) and in June 2011 became a Fellow of the Higher Education Academy, UK.

Research has been performed in the following main areas
• the probability of ruin of an insurance company in a general dependent (dual) risk model;
• the classical Appell polynomials and their relation to ruin theory;
• optimal reinsurance from the point of view of both the insurer and the reinsurer;
• the competing risks model and its application in insurance;
• exotic option pricing under the Variance Gamma process;
• new spline fitting method using Geometrically designed, variable knot regression splines (GeDS);
• computing the two-sided Kolmogorov-Smirnov distribution when the underlying cdf is (dis)continuous.

- 2011, The Faculty of Actuarial Science and Insurance (FASI) seminar, Organizer

In August 2011 I became the organizer of the Faculty of Actuarial Science and Insurance (FASI) seminar.

Since then I initiated and with the support of the HoD and the Deputy Dean, we held meetings with various colleagues from FASI and Cass Business School working on improving the external visibility of our seminar among academics and practitioners, in particular within the actuarial profession. The concrete changes/improvements which were undertaken led to an increasing number of practitioners and academics from other universities attending our seminar series. The latter is also expected to facilitate the KT/Enterprise processes/projects with the profession.