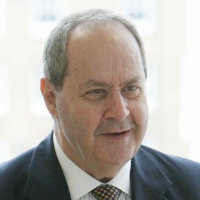 Professor Grammenos was born in 1944 and raised in Athens. He holds a BA in Politics and Economics, Panteion University, Athens (1971), and an MSc in Financial Economics, Bangor, Wales (1977). In 1999, he was awarded the highest academic accolade in the UK, the DSc in Shipping Finance, by City, University of London for creating – through his published research –"Shipping Finance" as a new academic subject, and for his "significant contribution to knowledge in Shipping, Trade and Finance".
He began his career at the National Bank of Greece in 1962 and was financial shipping expert at its head office in Athens from 1973 to 1974. He was Independent Researcher and Advisor from 1977 to 1982. He joined City, University of London in 1982 as Visiting Professor and became Professor of Shipping, Trade and Finance in 1986. He teaches Shipping Investment and Finance since 1982. He introduced, through the MSc, a new approach in international business, "the spherical approach".

He wrote the well-known seminal monograph on shipping finance "Bank Finance for Ship Purchase" (1979), published by the University of Wales Press in the Series of Bangor Occasional Papers in Economics, Number 16. His proposed credit analysis and policy in the monograph was adopted by many international and regional banks. It constituted the first academic study on the subject worldwide.
Overall, he has written papers and studies on Shipping Finance, published in refereed academic journals and specialist trade publications. Since the mid-1980s, through his research, class teaching and public presentations, he has brought to the attention of the shipping world the potential of public and private equity and debt markets as new sources for shipping finance.
He is the Editor of the major academic publication "The Handbook of Maritime Economics and Business" (2002, 20010), LLP, where 50 leading academics from 30 universities in 19 countries contributed 39 chapters. He has presented papers and given lectures in various parts of the world.

He was made OBE (Hon) by HM Queen Elizabeth in 1994 for his work in international shipping and finance; and was appointed CBE (Hon) in 2008 for "services to teaching and research". In 2013, he was appointed "Commander of the Order of the Phoenix" by the Hellenic Republic for his world-leading teaching and research in the maritime industry; in 2017, he became an Honorary Fellow at Bangor University, Wales; and, in 2019, he was awarded an Honorary Doctorate by the University of the Aegean.
He was 1998 Seatrade Personality of the Year presented at the London Guildhall by HRH The Duke of Edinburg; in 2008, he was awarded the prize of Distinguished Personality for his outstanding contribution to the shipping industry by the Association of Banking and Financial Executives of Hellenic Shipping; in 2008, he was awarded the ‘Achievement in Education or Training’ at the Lloyd’s List Greek Shipping Awards; in 2011 he was included in the Lloyd’s List Top 100 Most Influential People in the Shipping Industry; and, in 2017, he was presented with the Capital Link Greek Shipping Leadership Award.
He was the recipient of the "Personality of the year 2018" in the Lloyd's List Global Awards where It was cited "...He is, however, best known as a leading global authority on shipping, trade and finance. Over 40 years he has made a unique contribution to the global shipping industry by sharing his scientific and academic thought leadership. Through educating, mentoring and inspiring multiple generations of shipping executives, Professor Grammenos has arguably shaped the modern shipping industry as we know it". In the same year, he was appointed to the Maritime 2050 expert panel of the Department for Transport to advise the UK government on the country’s maritime strategy.
Since 1994, he is an Archon of the Ecumenical Patriarchate of Constantinople. He is Member of the Board of Directors of the Alexander S. Onassis Public Benefit Foundation (1995-date); Member of the American Bureau of Shipping (1996-date); Fellow of Royal Society of Arts (1996); Non-executive Member of the Board, Marfin Investment Group (MIG) (2007 to 2010); Freeman of the City of London (2000); Liveryman of the Worshipful Company of Shipwrights (2002); Fellow of the Chartered Institute of Bankers (2004). He is Visiting Professor at the University of Antwerp (2000 to date) and was President of the International Association of Maritime Economists (IAME) (1998-2003); Honorary Fellow, Institute of Marine Engineers, Science and Technology (IMarEST 2008); First Deputy Chairman, Maria Tsakos Foundation, Greece (2014-date). He was Founding President of the Governing Body of the International Hellenic University, Greece (2006-2019).
In 2009 he was chairman of the first organised meeting of UNCTAD, United Nations, Geneva on “Maritime Transport and the Climate Change Challenge”, where 40 member countries took part in the three-day meeting.

Thesis title: Essay on the US Public Equity and High Yield Bond Markets as a Source of Finance for Shipping Companies