The Mais lecture was established in 1978 to honour Lord Mais, a former Lord Mayor of the City of London and Chancellor of the University.

It is regarded as the City of London’s foremost event for the banking and finance community, and is attended by senior City practitioners, academics, alumni and the media. 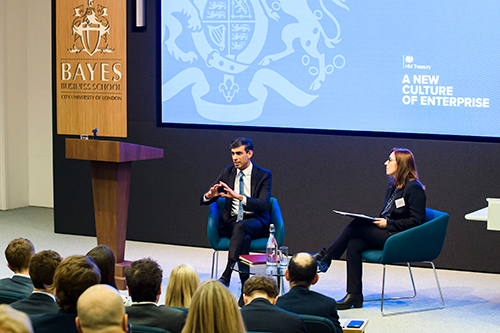 Rt. Hon. Rishi Sunak MP delivered the 34th Mais Lecture in February 2022 in which he set out his vision for a lower tax economy, delivered in a responsible way. Sunak said it was a "great privilege" to deliver the Mais Lecture, joining a long line of prestigious and eminent speakers from previous years.

From the Centre Director:

The Mais Lecture is an important event in the calendar for the Centre for Banking Research, as many of the speakers have a significant impact on the direction of our work.

Over the years, we have been privileged to welcome Chancellors and Shadow Chancellors, future Prime Ministers, Governors of the Bank of England and many expert economists to deliver visions and forecasts that have shaped the financial world.

In the last two years it has been a personal honour to host discussions with both Rishi Sunak MP and Anneliese Dodds MP, amidst a backdrop of dramatic global events which require strong financial and economic leadership.

Mr Sunak cited the Mais Lecture – where he unveiled his vision of a new culture of enterprise here at Bayes – in his 2022 Spring Statement to the House of Commons, demonstrating the influence of this prestigious event.

Our mission as a Centre is to disseminate cutting-edge research and engage with a wide array of stakeholders, leveraging our network of excellence in banking research through publications, workshops and events. The topics of discussion generated by the Mais Lecture is a big part of this, and a significant milestone across the City of London, the United Kingdom and the rest of the financial world.

Mais Lecture in the Media.

'Calls to slash taxes now are flippant': Rishi Sunak is set to reject pleas for immediate cuts because spending levels need to be sorted out first. Daily Mail, Wednesday 23 February 2022